Dan Ramirez has ruined how I look at art. And by “ruined,” I mean “demolished.” How could I have known that working with him would lead me to this embarrassing point where I find myself saying, aloud, “I love minimalism.” It’s horrifying.

Just look at the exhibition currently on view the Blanton Museum of Art, Form into Spirit: Ellsworth Kelly’s Austin (February 18, 2018 – April 29, 2018). Organized in support of the opening of Austin, Kelly’s building/installation on the UT campus, the exhibition is all of the things a university art museum exhibition should be: informative, interesting, nicely installed, well-researched, etc. It is also astoundingly beautiful.

Yes, gorgeous. Which I didn’t expect. And although this is probably a career-killing thing to admit, I was not mesmerized by the color in the exhibition (I know, it’s Ellsworth Kelly! How can anyone not be astounded by his exploration of color?). Instead, it was the black and white prints and sketches that took away my ability to think clearly.

The prints are large, and in a brave and aggressive decision, hung 3-high by 8-across. Although this arrangement makes them nearly impossible to see individually, and difficult to appropriately light, it does emphasize the expressive power of the group as a whole. The repetition of the black and white forms, with such a deep blackness of the ink on the paper, along with the scale of their printing, makes the group quietly coercive (I could go on about the prints, but it would be far better to look to the important work done for a 2013 exhibition and publication at MMOCA here in Madison). Then there are sketches of the stations of the cross, all black and white, all concentrated power in a small format.

This force is continued by the upright sculptural totems that are grouped nearby. Towering and simple in form, their differing media (redwood, metal) make no difference in their individual ability to convey solemnity and presence.

The meditative and quiet are continuous throughout the exhibition and–outside, down the path, through the enormous wood doors–into the work Austin, where the black and white forms are softened as they are translated into marble, and color becomes light that falls over the walls of the building. A redwood totem stands over the space, not lit but still dominating from one of the alcoves. The quiet, the repeated forms, the simplicity of shape, all create a foundation to support all of that color play. It’s a completely mesmerizing structure.

(My images here are terrible. For better views see articles in the NYT, Architectural Digest, Texas Monthly, or ArtNet News. Or, for a more in-depth discussion about the background of the structure, see the 2012 lecture–from before the work was realized in Texas–at the Haus der Kunst by Carter Foster, then at the Whitney, now at the Blanton).

Of course I think of Dan Ramirez’ Twenty Contemplations prints. The repeated black and white, the sense of space and depth that each artist captured using a restricted palette and carefully honed forms, the feel of the paper saturated in ink. I’m skipping over the subject matter here—stations of the cross, devotional music—but I’m less interested in the specific iconography. It’s a very noisy world, and to be in a place where the mind quiets and the world opens, well, it’s just doesn’t happen very often.

Get yourself to Austin.

Another play-reading at APT, the last of this year’s Winter Words series. A beautifully written fable about the power of naming, the force of metaphor. A woman learns. She farms, she helps to birth foals, she takes labor into her own hands, she controls her name and thus uses language to define herself and her world.

A friend sends me a story and asks for feedback. In our discussion I encourage him to practice his storytelling skills. So he does, at a local story slam. He performs wonderfully, taking third place. He has written for years, has conducted interviews, and even participated in a writing workshop as he works to shape a long and complex personal story into a book. But this is his first ever outing on a story-telling stage. I guess I am now a coach.

And this week I am fresh off a professional development program. OK, not just any program. THE program in my museum world: the Getty Leadership Institute NextGen program.

I should be elated. Of course I am thrilled that I was able to participate, thankful for the support. But I am also stunned, mostly by the sheer volume of the words that have poured down upon me over the last month. Words and ideas like wave after wave, and even two days after completing the program I still feel as if I am swamped and drowning. It almost doesn’t matter where I try to start swimming, I am too far out to make progress in any direction. One of my cohort wrote that she is still trying to figure out what in the hell happened to her over the onsite week. I inhabit this same space.

It is the space where words are not yet complete. They are forming, but they are still sharp and the ideas they communicate have dangerous edges. I tried to use some of the words today and they felt hard in my mouth, they came out rough, I had to work to make them not cut. What the hell happened? I have so much to say but no words for any of it yet. 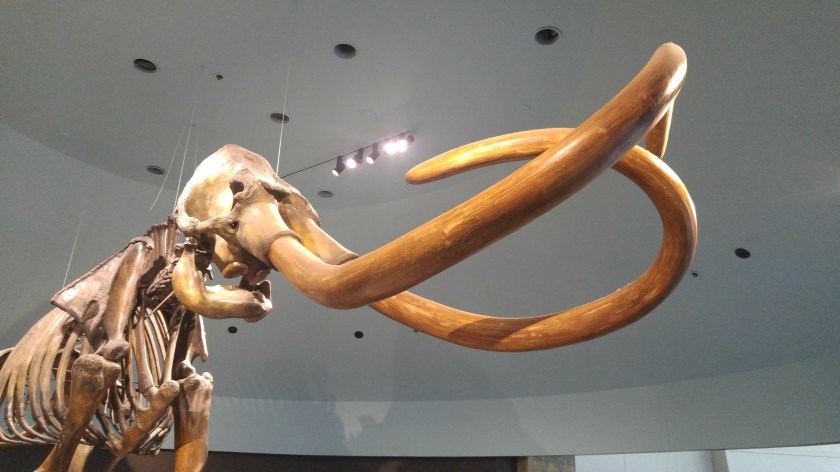 It’s like the bones that are excavated at La Brea. They are lifted out of their encompassing mire, then soaked and carefully cleaned. The darkened solution is strained to capture every seedpod and insect part that was caught during the same era as the bones of the animal that perished, trapped in tar. I need time to sift through that debris, to examine the minutiae, to discover what corollary life exists.

The words are the tools that scrape away the accretions, they transform a mass of tar into a trove of scientific wonders. Like knives into fowl, words transform the world. What will be found, what will be created, when the bird becomes food, when mammoth is transformed into fossil? What happens when my friend learns to be comfortable on stage telling his story, or when I get command of mi idioma, mi lengua? Necesito controlar mi lengua. Y luego, para usarlo.